Patricia Yeager, CEO, Honored as a 2020 Woman of Influence 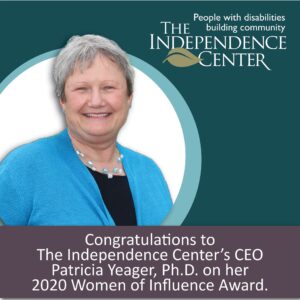 Congratulations to The Independence Center’s CEO, Patricia Yeager, Ph.D., who was recently named as a 2020 Women of Influence award winner by the Colorado Springs Business Journal (CSBJ). She is one of 15 outstanding women who were honored at a virtual celebration on November 5th for creating a legacy of leadership in the Pikes Peak region through positive change.

Since 2011, Patricia’s leadership, dedication, and passion have empowered people with disabilities to live more independent lives while positioning The IC as a national leader in the Independent Living movement. Learn more about her vision and accomplishments by clicking here for a profile written by CSBJ or read below for an accessible version.

Patricia, thank you for all you do!

“This has gotten bigger than anything I dreamed of.”

Throughout her decades-long career leading in­ dependent living centers, Patricia Yeager has fought to change public perceptions and empower those with disabilities.

Yeager, who has served as the CEO of The Indepen­dence Center of Colorado Springs for the past nine years, knows all too well the stigma faced by those with disabil­ities. Growing up in Huntington, West Virginia, she saw some of them firsthand.

“I lost a good part of my hearing at the age of 2, which is an important time for speech development,” Yeager said. “When I was a kid, people would see my hearing aids and make all sorts of assumptions of, ‘Oh, she’s not very smart. What can we expect from her?’

“So I know, at least a little bit, that feeling of being less-than – not because of anything you can control but because of that disability. And it just pisses me off, frankly. It makes me frustrated and angry and makes me want to show people that I can do this, and so can all these other people with disabilities.”

Yeager’s career working with those with disabilities has taken her across the country. She was the executive director of the Denver Center for Independent Living from 1989-1991, held the same position for the Access Center of San Diego from 1992- 19 9 7, and again for the California Foundation for Inde­pendent Living Centers from 1997-2005.

“Living in West Virginia, it’s hard to get out,” Yeager said. “So when I got a chance I just had to keep going west until I couldn’t go west any further. And I did move around quite a bit – although the more you do it, the harder it is. So I think I’m done moving around.”

Yeager moved back to Colorado in 2006 to complete her Ph.D. in rehabilitation administration and in 2011, was offered the job of CEO at The Independence Center of Colorado Springs. Her primary mission in taking over the position was to help modernize the operation, and she’s since led the organization through a period of significant expansion.

“When I came in … we had 160 people working here and we were still doing things a family way, which is not bad when you’re small, because it’s a great culture to work in. But when you’re large, you have to do some things differently.”

Yeager led efforts to computerize the organization’s accounting and human resources programs, acquire tracking software for its home health business and sub­stantially grow its staff. She also helped diversify its funding streams which, before her arrival, were completely dependent on Med­icaid.

“This has gotten bigger than anything I ever dreamed of in 2011 when I first started here,” Yeager said. “We now have about 340 people working here and our reve­nues have doubled.”

And though she’s proud of the growth she’s overseen at the center, she said what’s been most rewarding about her career thus far – she plans on retiring in two years – has been making a difference in individual’s lives.

“When I see people with disabilities who have never spoken up at a city council meeting or county commis­sioner meeting … and they speak up about what they need and what will make the community better for peo­ple with disabilities, when they’ve never done that before, it makes me a little emotional,” Yeager said. “Because you can see that, all of a sudden, they see someone’s listening and that they might see change occur. And it makes them see themselves differently.

“So it’s about building social capital and seeing peo­ple with disabilities not as takers, but as people who can contribute to make the community better. When they have that opportunity, man, there’s just nothing better.”